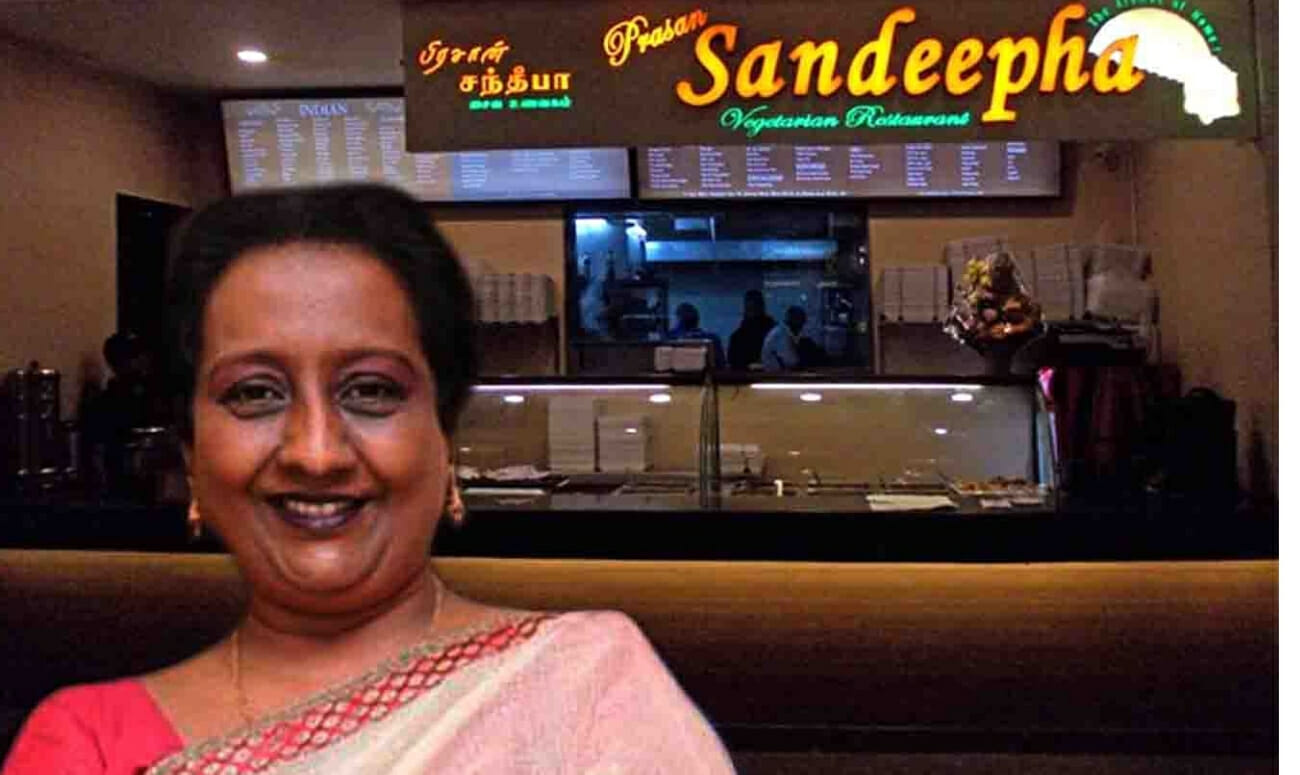 In her journey to becoming a fearless entrepreneur, Patricia Narayan weathered it all: a failed marriage, early motherhood, tough life, tragic loss of loved ones and other upheavals. She exemplifies a woman undeterred by struggles whose passion helped her rise from the ashes. She began her business with 50 paise a day and now earns lakhs daily. Today, Patricia Narayan lives in a beautifully furnished duplex in Velachery and is the director of the Sandeepha chain of restaurants, in Chennai.

Patricia was the eldest of a five-member, a Christian family from Nagercoil, Tamil Nadu.  Despite a conservative upbringing,  her childhood was relatively comfortable. As a student at Queen Mary’s College,  Patricia met, loved and secretly married a Hindu-Brahmin man, thirteen years older than her. When the news of their marriage broke, they had a proper marriage but their conservative, bitter families severed ties with them. Patricia was only 17, married and on the verge of motherhood. Her idea notion of a happy married life was soon shattered when she realized her husband was a drug and alcohol addict. He beat her frequently and was uninterested in providing for their family.  After several unsuccessful attempts to help her husband give up his addiction, Patricia accepted failure and returned to her parents. She knew she had only two options; succumb to ill-treatment or take control of her life. She chose the latter.

Putting her life together

Roofless, penniless and with two young kids, Patricia returned to her parent’s home, with her husband in tow. Her father agreed to give them refuge. Patricia knew she did want to live off her parent’s money forever and needed to do something to support her kids and family. Cooking had always been her passion and Patricia began experimenting with new dishes. She borrowed a few hundred rupees from her mother to make squashes, jams, and pickles at home. Her mother sold Patricia’s products to colleagues at her office.  Patricia got encouragement to proceed when her products sold within a day.

Patricia’s father had a friend who handed out free mobile carts or kiosks to people who would employ and train at least two handicapped people. Patricia grabbed the opportunity. She went through the rigmarole of getting permissions and finally set up her cart at the crowded Marina Beach, in June 1982. Her life changed forever. Most of the beach carts sold tea and cigarettes, so Patricia decided to offer other items, such as cutlets, samosas, bhajjis, fresh juice, coffee, and tea. On her first day, she only sold a cup of coffee for 50 paise. Her mother encouraged her not to get disheartened and Patricia returned to the beach. The next day was much better and soon she began making a steady income adding more items like ice-cream and French fries. Her best earning for a single day was Rs 25,000. She continued her business until 2003.

In an interview with The Hindu, Patricia said, “The Marina is my business school, it is my MBA.”   Despite being a good cook, Patricia was clueless about business.  Her cart at Marina taught her how to source supplies, manage time and strategize. She worked tirelessly to build her business and loved the entire process. While she was at Marina beach, in 1984, the Chairman of the Slum Clearance Board admired her work ethic and asked her to cater their office canteen. Soon other opportunities cropped up and she began catering for several company canteens such as Bank of Madurai and the National Port Trust Management School, where she served nearly 700 kids a day. She believed as long as she had the fire in her belly, nothing would stop her.

Patricia made a big leap in business in 1998, Patricia when she partnered with Chennai’s Sangeetha group, a prominent restaurant chain. As things began looking up for Patricia tragedy struck. Her abusive husband, who continued ill-treating her, disappeared and died in 2002. Barely two years later, her newly-wed daughter and son-in-law were killed in a road accident, due to a lack of ambulance facilities. Their death shattered Patricia, who found it difficult to put her life together again. Her son left his naval job in London and returned to support his mom through the crisis. It took two years before she recovered from mourning and returned to her business. Along with her son, Patricia established the Sandeepha chain of restaurants, in memory of her late daughter. She also donated an ambulance at the crossroad where her daughter died.

In 2010, FICCI named Patricia their Women Entrepreneur of the year. Her life or work has not been a cakewalk, but despite being a part of a competitive industry, she kept herself afloat showing a strong survival spirit and achieving tremendous success.

Her story of survival and self-motivation is empowering and should inspire others to follow her lead.

READ MORE: SCIENCE AT THEIR DOORSTEP, BRINGS TRIBAL STUDENTS CLOSER TO THEIR DREAMS