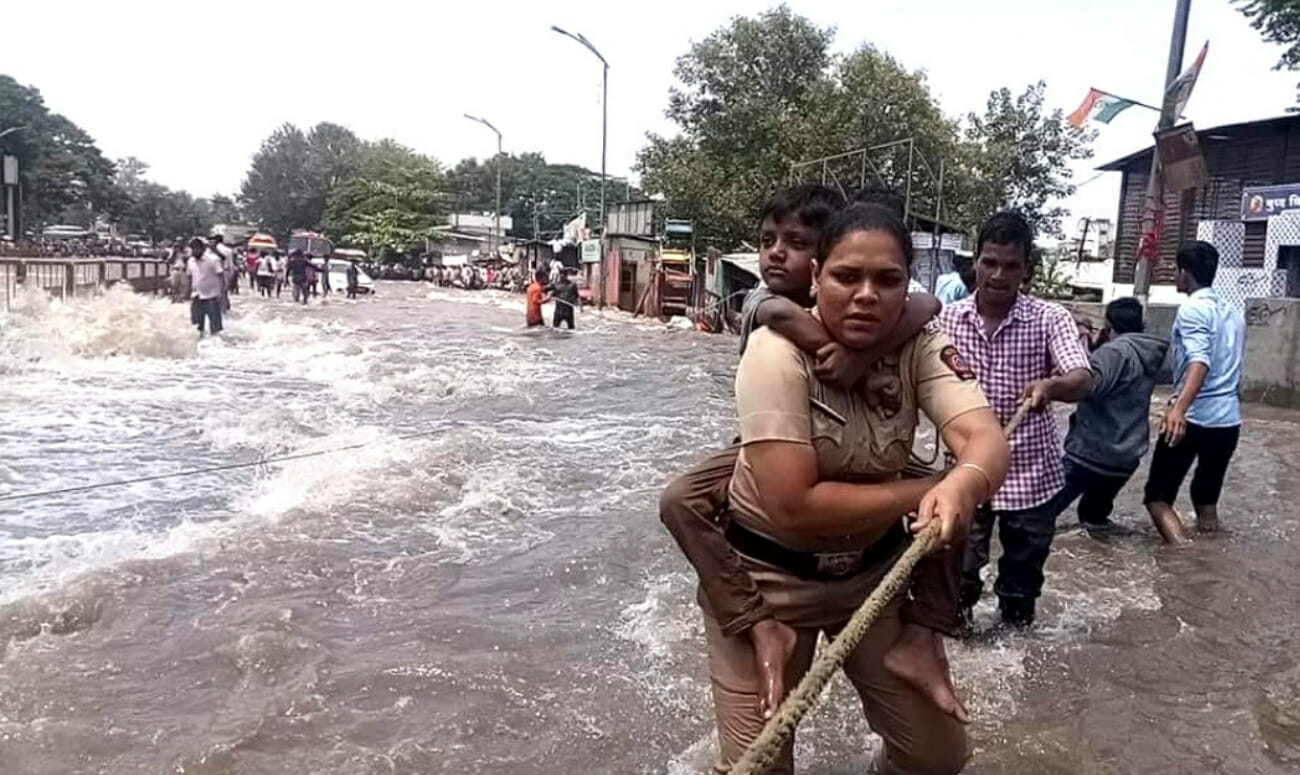 Pune was in shambles as the wall of the Mutha river canal collapsed on Thursday, September 27, resulting in flooding near the Dandekar bridge area. According to one of the men who hoped others in the rescue, “The water was up to my stomach. I led the women out holding their hands and the children I took piggyback as the water had gone above their heads.” The water rushed in so quickly without notice that anyone hardly got the time to react. With the collapsing of the wall around 11 am, the river water, flowing as fast as 1277 cusecs, hit the roads and gushed into many huts in the slum belt.

According to sources, police constable Neelam Gaikwad had reported for duty at the Dattawadi police station as a part of her daily routine, and she began her regular work of writing complaints when she received a call from a senior officer, “Reach the spot of the flood at the earliest.” Having been known to be a brave, outspoken cop, Gaikwad had no clue about the ongoing situation 2 km away. Devidas Ghevare, a police inspector, praised the tough task-master Gaikwad. He told Pune Mirror, “She is always on the forefront in situations like this. She is one of the bravest and most dutiful officers that Pune police has.” He also went on to add that during Ganpati Visarjan earlier this week, she had been instrumental in handling law-violators and drunkards with aggression which again got resurfaced with her prompt springing into action last night. In the words of Gaikwad, “When I reached, I found people flailing in the water that was swelling fast. There was nobody to rescue them. I handed my purse and mobile phone to a stranger and got ready to wade in.”

On her rescue mission

Even when she was removing her shoes in a shop, she spotted its owner desperately trying to keep himself from drowning. Immediately, she grabbed a tire from a nearby garage, strung it to a rope and threw it to him and made him stay afloat, as the 28-year-old told the publication. With the worse turn of events, she herself realized that the water was reaching way above knee level & she felt an urgent need to save little children, who were not tall enough to keep safe above water. “The women and children were scattered, and in their panic, family members could not find each other.” Genuinely speaking, for the marooned people, Gaikwad was a savior who had rescued 15 children and a number of adults in a span of two hours. Having wasted no time in identifying people who could not walk to safe places–like Chhaya Waghmare, she rescued the stranded men safely home. However, the ambulances, fire brigades, and traffic police were deployed to normalize the situation in the city as soon as the news of the flood hit. In a crowded city, where one part is a slum belt, and the rest put up in low-lying areas, the situation of floods did not get the upper hand because of these heroes! Till now, no casualty has yet been reported.